Susquehannock’s theatre program has less than two weeks left until their showing of “Spongebob: The Musical.”

“Spongebob: The Musical” is the musical adaptation of Nickelodeon’s long-running cartoon, finding themselves in the undersea city of Bikini Bottom, inhabited by happy-go-lucky and ever-optimistic yellow sea sponge SpongeBob SquarePants and his equally quirky circle of friends and neighbors.

This coming weekend, March 19, tech week will start, which is a week’s worth of rehearsals to iron out the wrinkles in the production.

Stage manager and junior Lauren Paules knows how demanding tech week can be with everyone putting in several hours every night to prepare for the first show.

“Tech week is a demanding week when involved in theatre because it’s essentially our ‘championship’ or ‘final countdown,’” Paules said. “We work for months to get to this point, and tech week is when we need everyone to nail down the final aspects to produce a terrific show! With it being our ‘championships,’ it can be very demanding and exhausting but also so exhilarating and heart-warming at the same time. During this week in our show process, dedication and commitment is the most important which can make it strict, but when you really love it, you’re willing to dedicate all of your time to it.”

The cast and crew have been waiting for the last week to come, making sure their hard work pays off.

“I am so excited for the upcoming production of Spongebob,” Paules said. “It has been so amazing to see the cast, crew and pit work so tirelessly on their portion of the show over the last couple months, and it will be even better to see it all come together for our show.”

Led by Director Will Jenkins, senior Juliana Quintillian and her cast mates have been working around the clock to memorize lines and prepare for the show.

“I, along with everyone else, have to put a great deal of time and energy into the show to get it ready for viewing,” Quintillian said. “Since the beginning, I personally have had up to 5 rehearsals every week and put in hours upon hours of work each week to learn lines, songs, dances and more. The entire cast has worked incredibly hard as well, putting in very valuable time multiple days a week to memorize this intense show and get it up and running in time for our show weekend.”

With all of the intense hours put in, not all of tech week is serious, and the cast and crew get to have some fun as well.

“As tech week goes on, it generally gets less stressful as the design gets closer to the vision,” Warner said. “On the other hand, any issues that arise tend to be more worrisome the closer we get to shows.”

Warner also sees a difference in this show compared to previous shows from his perspective.

“This show is not a typical lighting show in that it doesn’t take place in a city or the country but under the ocean,” Warner said. “We will have to use a multitude of effects, blue colors and movement to convey the unique atmosphere to the audience.”

With the previous few shows being either canceled or modified because of the ongoing pandemic, this will be the first show with no masks.

“Actors no longer needing to wear masks greatly benefits the entire cast in many ways,” Quintillian said. “We are able to sing fuller and project more when speaking to produce full, rich sounds during scenes. We are able to use our facial expressions a whole lot more with acting, which helps add to the shows and allows us to act off of one another. Not wearing masks also enhances the viewing experience for the audience and makes the show more enjoyable for me and my cast mates.”

There will be several showings on the weekend of March 25.

If you are interested in buying tickets, they can be ordered online at susquehannocktheatre.com, or they can be purchased at the door.

Any questions and concerns are to be directed to [email protected]. 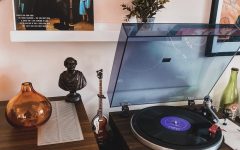