2014 alumnus Nicholas DeLuca has returned to SHS to teach chemistry and coach junior high football, following his passions in both science and sports.

With a year of teaching experience at Dover High School in the midst of the pandemic, N. DeLuca has high hopes for this year with students being back in the building.

N. DeLuca never imagined himself in a teaching position, but instead began a science major while attending York College, demonstrating to students that it is never too late to change gears and pursue a different path.

“I was originally a chemistry major in college, and I decided that it wasn’t what I wanted to do,” said N. DeLuca. “I fell into teaching naturally, and I had a wonderful mom who was a great inspiration in that area too.”

He is here not only to teach his students, but to bring the same enthusiasm to the curriculum as the teachers who taught him while he was in high school.

“I loved my time here personally,” said N. DeLuca. “I really felt like I learned a lot, and there were a lot of great teachers. I want to give back to all the students that are here now.”

N. DeLuca is hoping to be an active part of the school community, not only as a coach, but as a part of theatre.

“I’ll likely help with the theatre stage crew in the spring because I was involved in that as a student and want to pass on the same experience,” said N. DeLuca.

As a teacher, one of N. DeLuca’s biggest supporters is his fellow teacher and mother, Karen DeLuca, who is glad to have him at SHS once more.

“I literally never see him, and our paths do not cross in the halls,” said K. DeLuca. “However, I love it. It is so neat that he’s in the building, and I’m proud of him. It’s pretty cool that we’re both here.”

N. DeLuca shares the same standpoint, but explains that K. DeLuca is still very much his mom more than a co-worker.

“It’s weird in faculty meetings because she yells at me if I need to adjust my tie or something like that,” said N. DeLuca. “We don’t carpool contrary to popular belief.”

Both mother and son are still adjusting to working in the same building, but it is a bit more difficult than it seems.

“I accidentally shushed him once in a meeting,” said K. DeLuca. “He would probably say he wishes I wasn’t here, but I promise I’m going to stop mom-ing him.”

From email mix-ups to mom moments, the SHS alumnus is happy to teach alongside his mother, who wishes him the best in the science department.

“Overall, it’s been great, and I’m thrilled to have him in the building, and I hope he’s here for a long time,” said K. DeLuca. 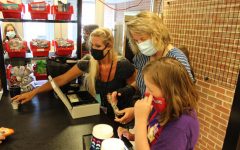 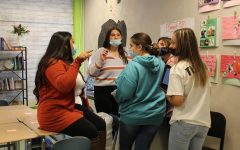 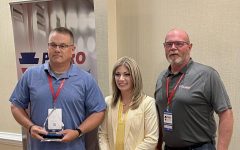 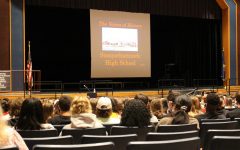 SHS Reflects on 20th Anniversary of 9/11