After an undefeated season, the boys soccer team won their final regular-season game against Gettysburg, leading to districts. They pulled through with a win against Daniel Boone and then went on to play Fleetwood.

Head Coach Brett Maxwell was excited to head to the playoffs.

“This year has been a roller coaster,” said Maxwell. “We’re thrilled to get the opportunity to have a postseason and keep things rolling.”

The team has done a lot to prepare for where they stood going into the playoffs.

Junior midfielder Ashton Murray agrees the team put in a lot of preparation for this.

“In order to prepare for the district tournament, the team has really started focusing on how to play as a team on and off the field,” said Murray. “We have learned how to take pride in games, while also taking responsibility for our own individual actions.”

“Being a freshman they expect you to do well-playing varsity,” said Dilts. “They’ve put in a lot of good work in practice and so far it’s paying off but each practice we’re finding ways to get better.”

Maxwell has taken it one game at a time and has always stayed positive.

“At this point, every game is going to be a tough one, and we need to take it one game at a time,” said Maxwell. “I believe we have as good of a chance as any team of making a deep run, but the teams we will play from here on out can too. We just need to continue with the mentality that every game is a chance to continue our season.”

Even though the boys lost their second game into playoffs against Fleetwood 2-1 on Nov. 7, Murray feels that the boys had a very good bond.

“I believe that the team’s bond and the chemistry of the team is quite good,” said Murray. “We all have a team-before-self mentality, always putting the team first. We have grown as not just a team, but rather as a family through the practices and the tough pandemic times.”

This season the team had multiple boys make the YAIAA All-star team,making their coach proud.  See Maxwell’s response to his players below.

Unfortunately, the boys did not make it further into district playoffs after their game, ending their season with a 13-1 record. 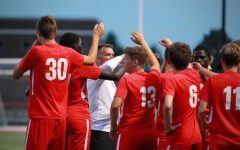