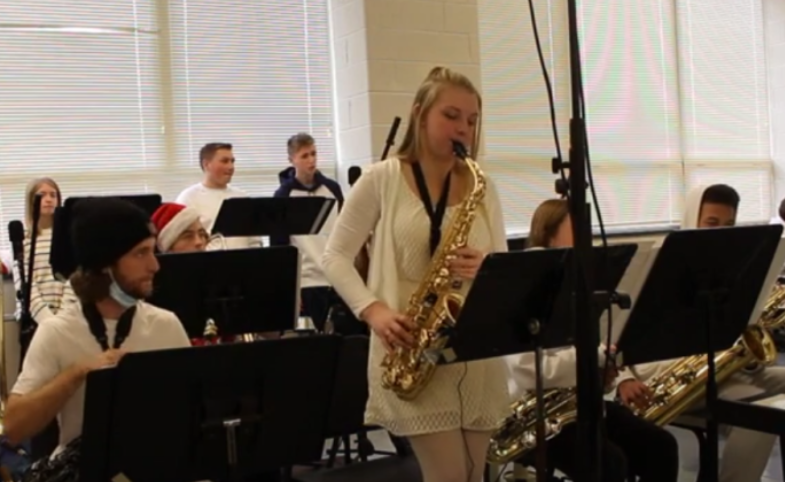 For the first time in a while, jazz performers have gotten a chance to uplift others’ spirits with their music in the cafeteria the week before the winter break.

One of the many performers, senior Joshua Rutters was able to share what challenges they ran into while trying to play in the cafeteria and trying to play for all three lunches from 10:22 a.m.-12:30 p.m..

“It was a pretty sizable challenge from a standpoint of needing to make sure that everyone in the band could be [available],” Rutters said.

A lot of the challenges that they faced were more than just being available to play as a group during the pandemic. They had faced a problem of the area they were given to perform for the lunches.

”[Another issue was] definitely the capacity in the room,” Rutters said. “We did not want to force so many people into a small area.”

The jazz band worked diligently to find a space to play safely, so that students were still able to observe without interrupting their normal schedules.

“We [performed this way] to give a little exposure to the student body,” Rutters said.

With events like this, there is always a hope that students will be interested in joining for upcoming years.

Whenever anyone places themselves in a stoplight, they are bound to get some exposure.

As with every performance, there has to be tight coordination. “Everyone has had a part in this and the communication could not be clearer,” Rutters said.

When looking to where the jazz band found their idea of performing in the student lunch periods, Poole credits Dr. Kevin Molin.

“We wanted people to just appreciate that there are a lot of talented students in the building that work really hard,” Poole said.

Events like this usually take time to prepare and coordinate perfectly.

“Technically, we started preparing at the beginning of November, and senior members of the band have been preparing for this for years,” Poole said. “We usually practice two days a week, 3-4:30 p.m. as a group, and then, on their own, players have music to work on outside of school.”

With so many years of experience, Poole has coordinated and taught many different styles of music for the jazz band to play.

The jazz band hopes to continue a similar performing style in future years.

“We were thinking about doing it again in the springtime, which would be a more diverse set of music,” Poole said.