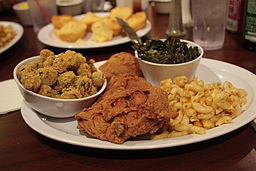 The multicultural club pitched a campaign for cultural food additions in the cafeteria.

Plans for new food additions in the cafeteria will be discussed in a January meeting with Helen Heidler, the SYCSD food service director.

The goal is to “provide students a chance to be educated about different cultures, different meals and have that experience,” according to school counselor and multicultural club advisor Matthew Shervington.

The multicultural club was created by students who have diverse backgrounds enrolled in SYCSD schools.

“The multicultural club is a club that came about as a result of two students…that voiced their experiences [at the high school and other schools in the area],” Shervington said. “Being students of minority culture, [they] had unique experiences that they wanted to bring awareness to to a general student populous.”

The club’s founder, sophomore Amanda Diggs, explains the sense of community the club brings to its members.

“The purpose of the multicultural club is to bring people of multi-culture together, so they have a safe space to talk about their problems, what’s going on in school, or their outside life,” Diggs said.

Diggs values the unity and support the club brings.

Plans for the new food additions will depend on certain factors.

“Provided [that we have the time], the full staff in the cafeteria due and [that we can] get the right materials and ingredients due to supply chain concerns, we would like to have special days dedicated to different meals that are from different cultures,” Shervington said.

“[The club] wants to make everybody feel included in the food that we eat and help people reconnect with their culture if they feel disconnected,” Pratt said. “We are hoping to partner up with the lunch staff and make multicultural [lunches] to make people feel included in everything we do at this school.”

Members of the club contribute to the food research of the campaign.

“Many of the multicultural club students have researched different ethnic meals from different cultures, [either] the culture they were raised in or a culture they’ve always been curious about or even intrigued by,” Shervington said.

Important aspects of the research are the cultural significance and the promotion of these meals around the school.

Every club member collaborates on ideas.

“We all have different ideas we want to include in our club,” Diggs said. “It is not just run by Mr. Shervington, me, or Ryan; it is run by everybody, so we bring together ideas on what we want to do, and we elaborate on the ideas to where we are able to bring it to Dr. Molin.”

Shervington sees why having exposure to new foods has great impact.

“Same as we learn in our classes, [our] AP human geo[graphy class and] many of our social studies classes where an understanding of different cultures is definitely going to benefit students in the long run,” Shervington said.

“There are a lot of people, myself included, growing up stuck in their own box of foods they will eat, and then once you leave the confines of where you are, you get exposed to [new meals], and it would look a little silly if you’re not willing to try other [foods],” Shervington said.