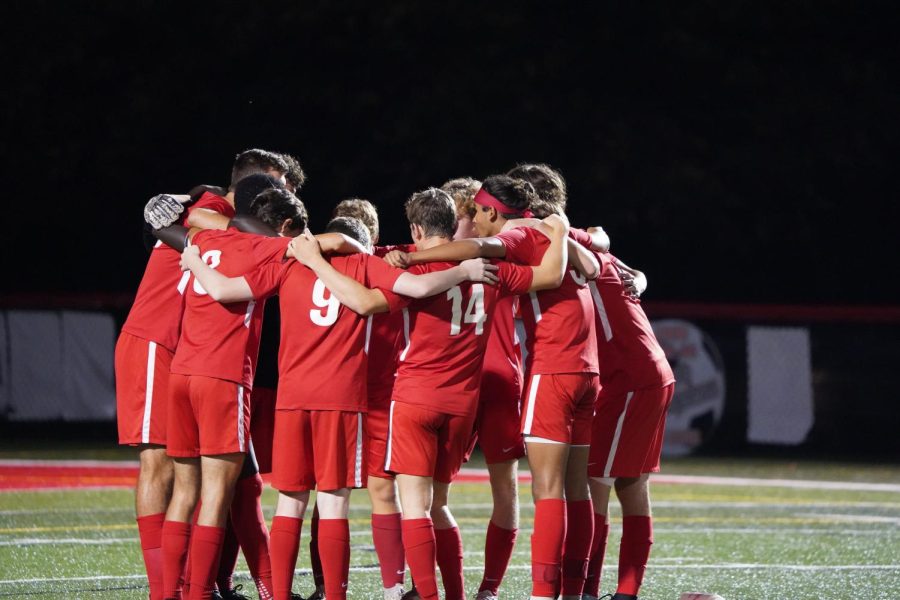 Boys soccer finishes their season with a loss to Donegal in the second round of Districts.

In the regular season, their only loss was to the New Oxford Colonials in the beginning of the season with a close game finishing 1-0.

As the team learned from their loss and practiced hard, they came back and won against the Colonials, 3-2, the second time both teams met.

The team had a successful run as they continued their winning streak and made it to both counties and districts as six time division champions.

As they made it to postseason play, they took on bigger and harder opponents.

Their loss against the Central Panthers in counties allowed them to prepare for the next challenge, the District tournament.

Head Coach Brett Maxwell sees the loss as a way for the boys to learn and better themselves for districts.

“We always talk about how you learn more about your losses than your victories,” Maxwell said. “That is the kind of the attitude we talk about as we learn from this and get better and that is what the guys did.”

Despite losing in the county game against the Panthers, they practiced hard in order to prepare for the next level of play in the District tournament.

Senior goalie Scott Denis believes the team was successful because of the commitment made on and off the field, from both players and coaches.

“We would prepare as a team for each game by working hard in practice the days leading up and by watching film,” Denis said.¨ We watch ourselves on the camera and see what mistakes we need to fix. Coach Maxwell does a great job of helping us find out what areas we need to work on and then putting it into action at practice so that we can get results. I believe that the team was so successful this year because of the commitment from the guys. Coach Maxwell will give the team the tools to be successful every year, but it is up to the guys to put in the work and make it a reality.”

Maxwell explains the feeling of winning the division once again, despite the doubt from those looking at the team.

“It was great,” Maxwell said. “Everyone always says ‘how are you going to make up for losing this guy and losing that guy,’ but we have every kid step up.We lose a good group of seniors again this year, but there are always freshmen, sophomores, and juniors that step up to the challenge.”

The team finished successfully in different ways, as they lost early in the postseason.

Junior midfielder Gabe Glanz has been a key player for the boys team this season and prepares for his senior season.

“I think we can prepare for next season just by getting together and building some of the team chemistry with some of the younger guys,” Glanz said. “I think we have a lot of potential for next year knowing we had a number of underclassmen playing varsity. The main thing that will prepare us for next year is just getting out and playing together.”

Not only does Glanz believe the preparation includes work in the offseason, but Maxwell agrees.

“We will definitely need to get moving in the offseason beginning in January or February,” Maxwell said. “We had a lot of injuries this year, so we are going to do a little more focused strength training in order to reduce that.”

As the team loses key seniors, there is a young group of players ready to step in in order to have another successful season next year.

Denis has advice for the kids coming up and preparing for next season.

“Take every moment and experience on the soccer team and enjoy it,” Denis said.Work hard in the summer and in training, but take the time to live in the moment. 4 years goes by so fast, and anybody who has been a part of this program would agree that when you look back on high school soccer will be some of the best memories.”