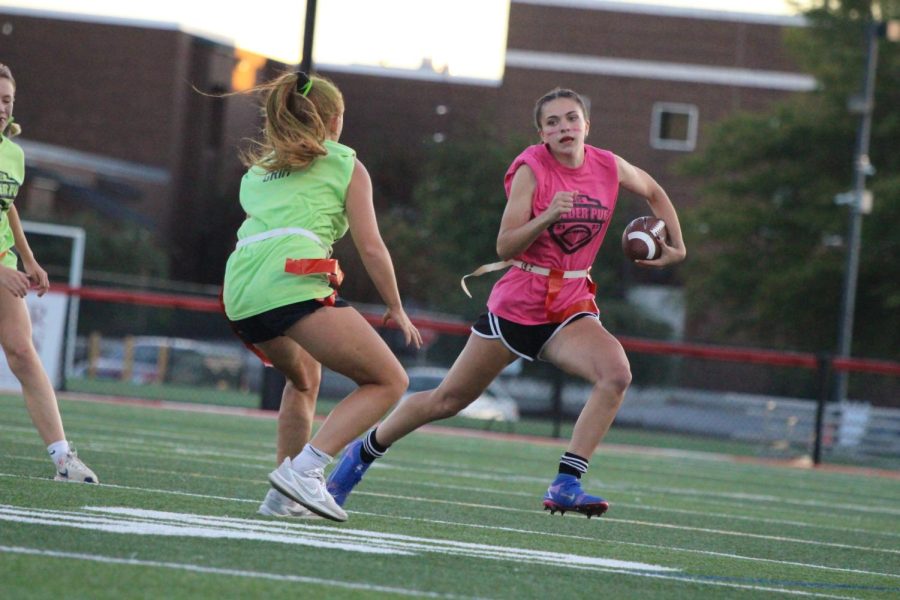 By Grace Hartenstein and Alexa Viands

The powder puff game is an SHS homecoming tradition where juniors face the seniors in a serious game of female flag football.

This year, on September 29, the seniors took the title and won some bragging rights until the next face off in 2022.

Doubling as both a school counselor and coach of the senior team, Matthew Shervington was excited to continue his streak by coaching this year’s game.

“I have been coaching Powder Puff at SHS every year since my first year here [in the fall of 2015],” said Shervington. “I don’t really keep score, but if I remember correctly, the team I was coaching won every year but 2016 when the juniors beat the seniors.”

Shervington plays an important role in the SHS counseling department and prioritizes relationships with students during the school day, but the game gives him an extra opportunity to connect with students he does not always see.

“I really enjoy the casual nature of practice where the girls get to be themselves and just joke around as you get to learn their personalities,” said Shervington. “I also really love the passion and pride displayed during the game itself. During those moments, you get to see girls who are normally quiet and reserved unleash their inner competitor. Even [with] athletes…you get to see that passion up close and personal…the entire experience you just get to see the players as more than students.”

Powder Puff allows Shervington to get involved with athletics in some way since his busy schedule would not allow him to coach a varsity sport.

“Powder Puff gives me a miniature chance to [coach] since it only takes about three days to do,” said Shervington. “I’ve been involved with it either as a supporter, a coach or cheerleader [since] I was in high school and during all 4 years of college, so it’s something I really enjoy and want to keep doing.”

Senior quarterback Lindsey Wachter is grateful for a chance to play in such an exciting game.

“My favorite part of Powder Puff is coming together with a bunch of girls from different sports to play a sport that we all haven’t played before,” said Wachter. “It’s really interesting to see how well we work together and how fast we can learn.”

Wachter and her team had practiced hard and felt ready to compete.

“I [looked] forward to playing the juniors and seeing how they have been doing because I [had] not seen any of their practices,” said Wachter. “Also, I [was] excited to see how my team [did] with our plays. The other team [should have] expected the seniors to win because we [had] been working really hard and I [felt] very confident in everyone.”

The junior team, coached by Wes Myers, had a tough act to follow, but proved their strength during the game.

“It very well may be the silliest event that is hosted by Susquehannock each year, but it is certainly my favorite,” said Myers. “The energy during the game is fast and furious.”

Like Shervington, Myers enjoys Powder Puff because it allows him to see students in a different venue in addition to the students gaining a new perspective of him.

“…my sons often attend practices, and games so the girls get to see me act as a father as well,” said Myers. “I also get to see them in a different atmosphere…goofy and super competitive.”

Junior quarterback Ava Holloway enjoyed her time playing and will likely continue the tradition next year as a senior.

“My favorite part about Powder Puff this year has been getting together with my classmates, some of whom I haven’t seen in a very long time due to COVID…[and] to create some good memories for a change,” said Holloway.

Holloway is a dedicated athlete outside of pPowder pPuff, so her competitive spirit was able to shine through during the game.

“A lot of people [expected] the seniors this year to win, but I think the juniors [had] a good chance,” said Holloway. “As for the crowd, [they should have expected] a good game, I [knew it would] be entertaining.”

Although the seniors did come out on top, both teams were ready to fight and left it all out on the field.