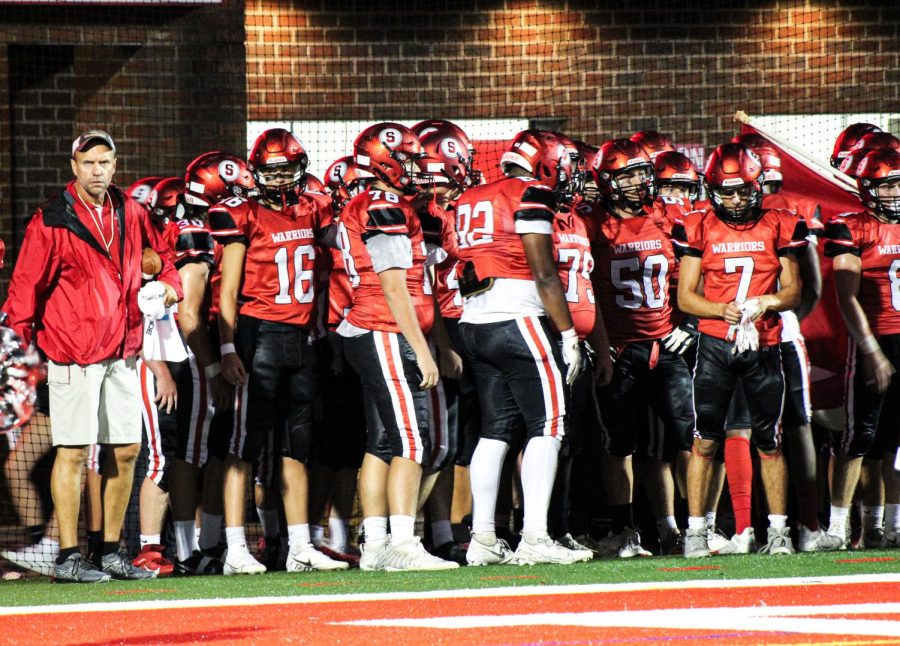 The team huddles before the game begins. The Warriors competed against the Hanover Nighthawks for their season-opening home game. Photograph by Mackenzie Womack.

By Mackenzie Womack and Alexa Viands

The first home football game took place on Friday, Aug. 27 with the Warriors facing off against the Hanover Nighthawks, earning their first season win.

The game had a late start due to a severe thunderstorm that reduced to light rain during the game, but the Warrior spirit was more than visible as the athletes warmed up with their normal energy.

The Warrior senior captains for the game were #50-Hunter Sturgill, #8-Zach Pecunes and #78- Mason Kight, and after the playing of the National Anthem and Alma Mater by the band, Hanover won the coin toss and elected to defer.

The Warriors called the first timeout with 10:35 remaining in the first quarter, achieving a first down at the 49-yard mark shortly thereafter.

From the 2-yard line, junior running back Ben Oestrike, number 20, scored the first touchdown of the game for the Warriors in the first quarter, making the score 6-0.

The game progressed through the rest of the first quarter with Susky keeping the upper hand, holding Hanover in their half for the majority of the plays.

From the 2-yard line, the Warriors advanced forward, scoring another touchdown with less than 5 minutes in the second quarter, Oestrike with his second of the game.

The Warriors attempted a lateral run to the left, again missing the extra point, but keeping the lead with a score of 12-0.

Hanover achieved their first touchdown with less than 2 minutes remaining before half-time, gaining the extra point right after, making the score 12-7.

The half wrapped up with a tackle on a Susquehannock offensive play, the 12-7 lead continuing.

The Hanover Marching Band presented their space-themed show at halftime, playing music to represent the exploration of space and the landing on the moon, ending on the popular tune “Walking on Sunshine.”

In the next half, Hanover called their second timeout merely a minute into gameplay with Z. Pecunes being injured while making an offensive run, but quickly re-entering the field.

Beginning at the 44-yard line, Z. Pecunes gained a first down, progressing to the 27, with the next play earning Susky an additional 7 yards.

Scott Denis, #42, kicked a field goal, giving the Warriors the lead, 15-7, and challenging the Hawks’ back line.

On a flag in the final quarter, pass interference was called on Susquehannock, nearly allowing the Hawks an advantage.

Oestrike intercepted a pass in the end zone that nearly resulted in a Hanover touchdown, giving the Warriors a first in ten on the 20-yard line.

With ten minutes remaining in the game, the majority of passes between the Hawks fell incomplete and led to yet another Hanover timeout.

Thanks to an interception by Z. Pecunes, the ball is turned over to the Warriors with merely 8 minutes left.

Sophomore Michael Fox, #30, made it to the 3-yard line before being pushed out of bounds, obtaining a first down for the Warriors and leading to a gain that resulted in a Warrior play from the 1-yard line.

Fox scored the third Warrior touchdown with less than 3 minutes in the game, Denis scoring the additional point through a field goal and securing the Warrior win with a final score of 22-7.

The match concluded with the SHS Marching Band’s show, “Reflections,” as the band attempted to “mirror reality through music and movement.”

Head Coach Steven Wiles was impressed by the team’s play, but realizes there is always room for improvement.

“I thought we played well,” said Wiles. “We executed offensively and had a fantastic rushing attack with 324 yards rushing. The defense played well and executed our game plan to perfection. We do have to clean up some penalties and improve our blocking.”

Wiles is excited for the games that await the team, remarking that with additional training, they will play at a higher skill level than previous years.

“We are excited about starting the season with a victory,” said Wiles. “We hope this is the first of many to come.”