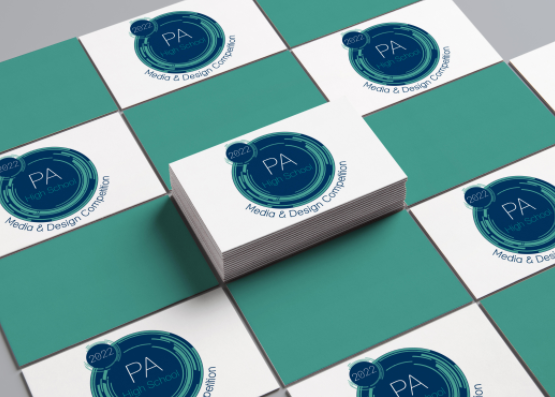 Hartenstein's design on a business card.

Juniors Grace Hartenstein and Jillian Geppi competed in this year’s PA Annual Media and Design Competition where Hartenstein won with her amazing design.

The PA Annual Media and Design Competition consists of creating appealing digital graphics that could market the competition’s brand and competing these designs against designs of students from other schools.

Hartenstein won in the high school division at the competition this year.

“We had to make a logo displaying the title of PA Annual Media and Design Competition,” said Hartenstein. “We had to make the logo itself and make a fake mock-up prototype of what it would look like on things, and… fill out a packet that was talking about our process.  You had to work with so little to make something that is exciting and appeals to the eye, and it has all the parameters. It took me about 20-25 hours of work in school and at home.”

The competition was introduced to Hartenstein and Geppi by Wade Bowers, the electronic arts teacher at the high school.

“One of the things that students learn is creating a professional design that will work in many applications,” said Bowers. “They have to learn the technical aspect of what colors you can and cannot use, so there are a lot of technical things and a lot of creativity involved as well.”

Geppi, who also competed this year, said she learned a lot from the competition, and it helped her see the future that she could possibly have in graphic design.

“I would love to go into some sort of design career,” said Geppi. “It’s always something I’ve wanted to do, so doing this gave me a glimpse on how professionally people or companies will choose and decide on logos and how they critique, giving me a look into what that future could look like.”

Hartenstein mentioned how she was not expecting to win the competition.

“I just tuned into YouTube live, and they were going through the categories and when it got to the high school competition- I was not expecting it at all,” said Hartenstein. “My name and picture popped up, and I was so shocked.”

If Geppi was given the chance to compete again, she mentioned how she would have gone with a different approach.

“I probably would have taken a more bold approach than just doing something different that you wouldn’t think of because I know my design was straight to the point,” said Geppi.

Graphic design is a tough career field with constant competition, so Bowers thinks that this competition is a great opportunity for students to understand.

“Design is a competition, and you are constantly trying to compete against other artists and so both of them are seeing the reality,” said Bowers. “Jillian had a really nice design, but the reality is [that companies and clients] are going to take the top design. It’s a competitive field, and it shows that it starts in high school and going into college is the same thing.”

Hartenstein learned some life and career skills from taking part in the competition.

“I learned not to give up on myself and to have faith in my work because winning at the regional level solidified the confidence that I had in myself before,” said Hartenstein.  “If you are interested in pursuing graphic design, it is a really good opportunity for your work to get out there because when you are applying to colleges, you need a portfolio, so having a company use my design in their marketing is a big deal.”

Geppi would recommend this competition to anyone that has some interest in graphic design as a future career.

“I would definitely recommend this to someone who wants a potential future in graphic design as a designer because it was my first experience professionally more so than just projects in school,” said Geppi. “It was getting out there and seeing possibilities. It was a great experience for me, and I wouldn’t trade it for anything.”

Hartenstein offered advice to anyone who is given the opportunity to compete next year, but are on the fence about moving forward.

“If they are scared about their design not being good enough, I think that you should always [take a chance] because you ever know if yours is the best in the room,” said Hartenstein.

Geppi mentioned similar advice in her own words.

“I would say go for it- you never know what’s [going to] happen, so take opportunities because you might not get a shot again,” said Geppi.