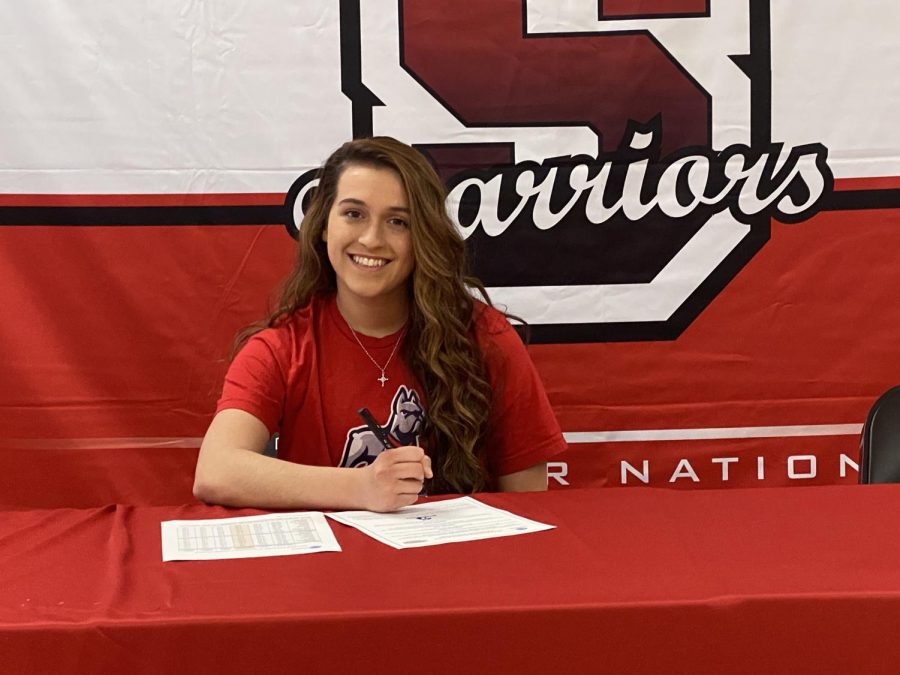 Savannah Lesley, who will be attending Elizabethtown and playing women’s volleyball, found a great pairing of academic and athletic opportunities.

“They have an accelerated accounting program… and I loved the coach when I met him,” said Lesley. “When I visited, I got along with the team, loved the campus, [and] everything just fell into place.”

Emily Rathell, attending Elizabethtown College for women’s soccer, felt the same way about E-Town and is excited to live her dream of playing at the collegiate level.

“I’ve played soccer since I can remember,” said Rathell. “Once I started playing FC York, I was nine [maybe] 10 years old, [the coaches] started talking about the path to college. As I got older, I just really wanted to play at a more competitive, higher level.”

For Cecelia Wilson, who will be attending Eastern University and playing women’s lacrosse, playing for a college was a decision she made later in high school. In the midst of the pandemic, this made the process even more challenging.

“We didn’t have a normal [summer] club season or fall season, which is the big recruiting time, so that made it very difficult to get to know coaches,” said Wilson.

The college search can be overwhelming for any student, but for those with hopes of playing sports, tours, visits and clinics can be vital parts of the commitment process and help potential students decide on a school.

Rachel Oestrike, who will be attending the University of Mary Washington and playing women’s lacrosse, took advantage of these opportunities.

“I was able to [tour the school], but I couldn’t do an overnight visit which is traditional for college recruits,” said Oestrike. “I went to prospect day, and I went back for an official visit. Online, I did a recruiting call with some of the players on the team and the coach.”

Some athletes, like Kaelyn Duvall, who will be attending Muhlenberg College and playing women’s basketball, had multiple offers to decide between.

“I had two serious offers … one was from Goucher and one was from Muhlenberg,” said Duvall. “[Muhlenberg] has a really good academic program … so that’s where I need to be if I want to become a veterinarian.”

Kelsey Gemmill, who committed to DeSales University and will be playing women’s basketball next year, feels the relief of this decision and the support of her parents along the way.

“[Committing] is definitely a weight off your shoulders, like everything you’ve worked for is finally showing,” said Gemmill. “My family is extremely excited. My parents love watching me play basketball… only being two and a half hours away really made them happy. My coaches were really rooting for me to play in college, and they were the ones who really pushed me to want to play.”