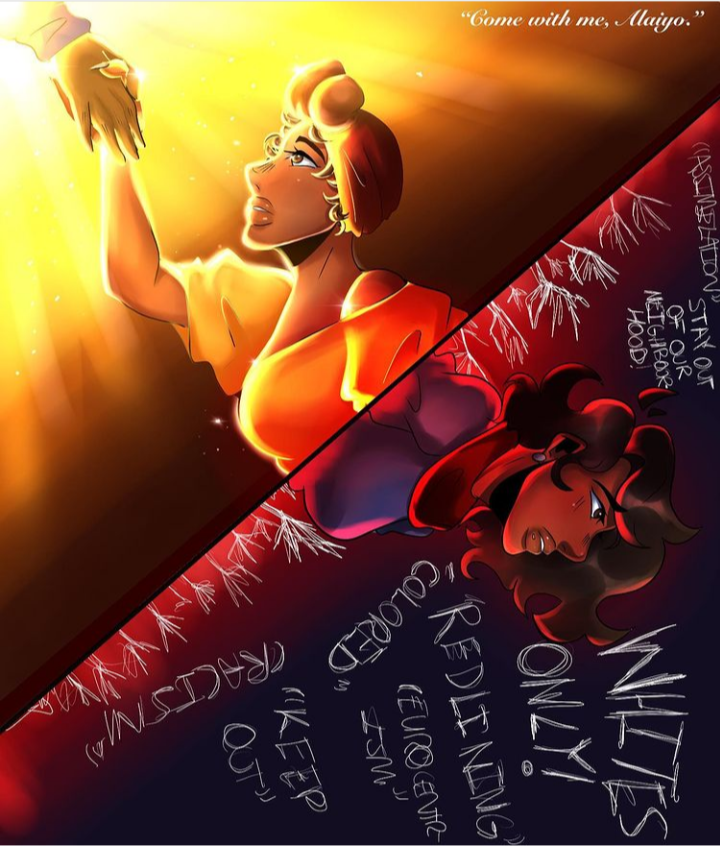 Beneatha Younger, an African American woman from Lorraine Hansberry's play, "A Raisin in the Sun" is depicted in her struggle to choose between her own culture and that of a highly discrimination-based America. Art courtesy of Zeinab Camara

In a year filled to the brim with Black Lives Matter protesters taking to the streets in a battle for equality, the month of February is more important than ever.

Black History Month is even prominent in the United Kingdom as well as Canada.

Since 1976, each president has annually selected a theme for the month, this year’s being: “Black Family: Representation, Identity and Diversity.”

This theme has resonated in the hearts of the African American community worldwide, including in members of the school community.

Sophomore Zeinab Camara sees how the theme is reflected in the struggles of today’s society.

“Personally, as a black girl growing up it was difficult not seeing many people who looked like me in the media,” said Camara. “When there were, they often fit a negative stereotype about black women. This made it difficult for me to express and appreciate my skin and culture. So I feel like [representation, identity and diversity are] definitely something that should be talked about.”

This being said, life in the years leading up to 1976 was no easy feat for the average African American, and it is thanks to black activists that African American History Month exists today.

The roots of Black History Month trace back to Carter Woodson and Jesse Moorland, two African American historians who created an organization with the purpose of promoting and researching the achievements of individuals of African descent.

In 1926, the organization that Woodson and Moorland founded, the Association for the Study of African American Life and History (ASALH), secured the foundation of Black History Month, creating a national Black History Week in the second week of February.

Why they selected this week was no coincidence. Feb. 12, 1809, was the birthday of Abraham Lincoln, who was the president to declare that all enslaved people of African descent “shall be then, thenceforward and forever free.”

Also aligning in that same week, Feb. 14, 1818, was the birthday of Frederick Douglass, an escaped slave who became an author, activist and abolitionist whose efforts majorly contributed to the abolishment of slavery in the time period.

Of course, Camara also remarks that people can support the black community by acknowledging these roots as well as other important figures that receive less recognition.

“From what I’ve experienced, black history month curriculums often only mention the same few important figures [including Martin Luther King, Rosa Parks and Harriet Tubman],” said Camara. “This often excludes other important figures from the equation, people who contributed just as much to black achievement as more well-known figures.”

As cities across America took to honoring Black History Week, which soon expanded to be honored through the duration of February at the pen of President Gerald Ford, the present-day Black History Month was born.

“Many achievements by African Americans are swept under the rug more than we realize,” said McGlaughlin. “Black History Month is a time where African Americans can have the chance to gain recognition for accomplishments that would otherwise not catch the media’s attention. Many black-owned businesses and black people trying to pursue careers have the chance to be seen and use this time to make progress towards their goals… this is the only time where the media is actually open to hearing different perspectives and giving black people a chance to be heard, even if it’s only for a month.”

To acknowledge the importance of the recognition of black history, the hardships of African Americans are incorporated into the curriculums of students through history as well as English courses.

English teacher Sara Mooney designates a portion of her tenth-grade course to the hardships that the black community faced in the past as well as those that are faced in the present, teaching themes of perseverance and kindness to her students through black stories.

“…we study Harper Lee’s novel ‘To Kill A Mockingbird’ and Lorraine Hansberry’s play ‘A Raisin in the Sun’ to explore how society corrupts innocence by forcing the black community to face racism head-on,” said Mooney. “This causes students to not only consider the historical roots of institutional racism but also the conscious and unconscious biases they may have, face, witness or hear about in the media.”

Mooney connects the stories she teaches to modern society, aiming to make students aware of the racism that is still ongoing today to create a better, more accepting society.

“If we, as educators, do not provide students the opportunity to learn about why the privileged in society take advantage of or ostracize those it deems as ‘different,’ how could we ever hope for positive change?” said Mooney. “We do hope that the more students know and are aware of the damage that racism has brought- and continues to bring to the Black community- the better equipped they will be to become the agents of change in their own communities- in the present and in the future.”

Further than the curriculum, there are many things that can be done to help recognize the black community during the month of February.

“There are some heavy topics that haven’t been addressed that really need to be [such as colorism, intergenerational trauma, mental health for black people, interracial relationships, degradation of black women, police brutality and far more], but many people, including black people, get uncomfortable talking about what needs to be said,” said McGlaughlin.

Racism and discrimination are evident across the globe, but with a touch of empathy and the acknowledgment of the stories and achievements of the African American community, the rift between races can heal and blossom into the equality that has been sought for centuries.

Whether you read a book from a local library that showcases black achievement or simply listen to the hardships and obstacles that African Americans overcome, black history is all around you, and it’s time that everyone connects to the past in order to pave the way for a better future.