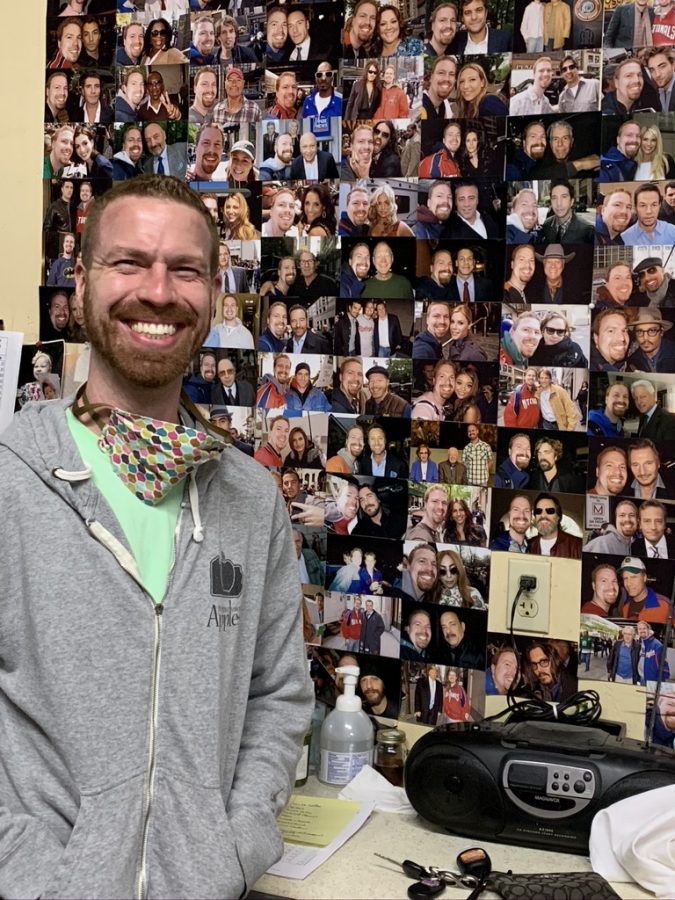 When wandering the back storage room of Brown’s Orchards, one will surely be surprised to meet dozens of celebrities gazing back at you.

Taylor Swift, Matt LeBlanc, Rita Ora, and even Brad Pitt can be found here, smiling brightly while pasted on the wall in the store’s back room.

Joe Doll, general manager of Brown’s Orchards, has collected several pictures with celebrities and created a wall showcasing his experiences.

Before the activity progressed to the posting of pictures in the store, Doll began taking these pictures as a long-time hobby.

“…when I started in the hobby, these hobbyists would mainly ask the celebrities for autographs (and not photos), and I didn’t really care about the autographs as much,” said Doll.

After beginning this hobby on a whim, taking his first picture solely because the opportunity arose, Doll has developed many reasons to continue doing this activity.

“I have made some good friends throughout the years that have the same hobby and I enjoy catching up with them and just enjoying the uniqueness of the hobby and seeing how the celebrities treat their fans,” said Doll.

“When I started in the hobby, the only way to get info was word of mouth, mainly from other fans or becoming friends with celebrity drivers or doormen or security guards,” Doll said. “Now, I’d say almost everything is available online.”

As a result of his hundreds of experiences meeting celebrities, Doll has had many, positive and negative, face-to-face introductions with many of the big names known around the world.

“I have many favorites,” said Doll. “Some of my favorites over the years [include] Matt Damon, George Clooney, Brad Pitt, Matt Groening (creator of ‘The Simpsons’), the cast of ‘MADtv’ (who took me out for drinks in Chicago after and Improv Festival), Will Ferrell, Johnny Depp, Lady Gaga, Robin Williams [and] the cast of ‘Spongebob…’”

Doll also mentioned the people he had the least pleasant experiences with.

“[My] least favorites are mainly celebrities that I have tried for and got turned down for the photo with them,” said Doll. “usually the celebrity will say they are running late, which is generally not true as I will run into them another time and the excuse is the same. [These celebrities include] Jennifer Aniston (only ‘Friends’ member cast I don’t have a photo with), John C. Reilly, Sandra Bullock, Julia Roberts, Cameron Diaz, Hugh Laurie, Natalie Portman [and]Joaquin Phoenix.”

Although the outcome is brag-worthy, the hobby is not for just anyone looking for an activity to kill time.

“The hobby involves a lot of waiting around and never comes with an exact timeline,” said Doll. “Some locations are packed with fans and getting close enough is impossible.”

Fueled by many different experiences throughout the picture taking process, Doll mentioned one of his favorite stories to date.

In a post-pandemic world, Doll does intend to continue adding to his collection and meeting celebrities throughout the country.