Why Your NFL Team has No Chance at the Lombardi 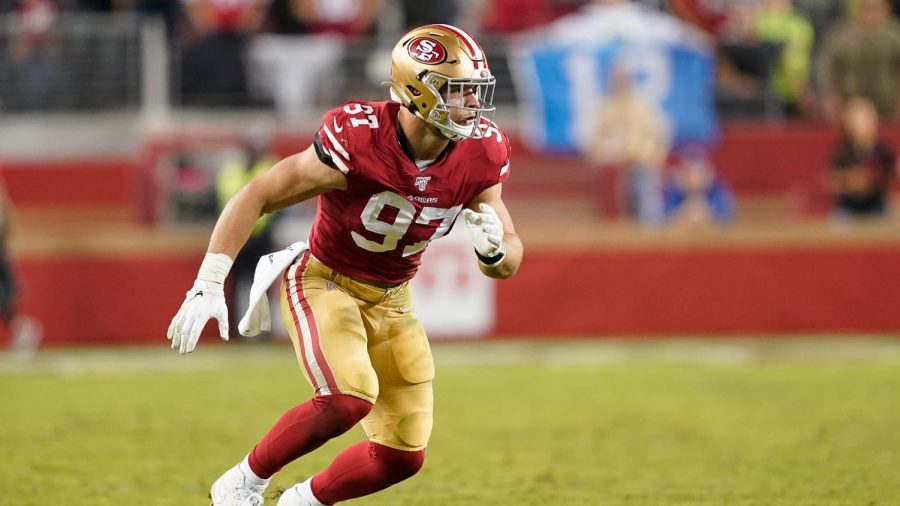 Nick Bosa setting the edge in a regular season football game. via @NBCSNiners on Twitter

It is once again time for people all over the nation to root for their favorite NFL teams, watch them win in the playoffs, and see them hoist the Lombardi Trophy for their franchise. The problem is, for most of the fanatics watching their team, that only one team can win. This list will help you, the fan, see why all of the other teams will lose, and your team will still reign supreme as world champions despite the results of the playoffs. At the same time, this list will also tell you why you should have absolutely no hope in your team at the same time.

Buffalo Bills: The Bills are a solid team. Their defense was ranked one of the top units in the entire league. The defense allowed them to win many games that should not have been close.

Houston Texans: They have playoff experience as a team already  and have a very competent quarterback in Deshaun Watson. The defense has not been slacking either this year. That being said, the Texans success comes down to the playmakers on the offensive side of the ball. The running game has two different style backs in Duke Johnson Jr. and Carlos Hyde, perfect for every situation. Plus, any of the wide receivers can take it for a score at any point in the game.

The Reason for Losing: The Texans are easily the most confusing team in the NFL. They had a lot of solid wins over the season. That being said, there were a lot of games where they decided to look like a team from the NFC East. With close games against  below average teams such as the Bucs, Jags, Colts and Chargers, they showed obvious weaknesses. Houston fans will point to good wins against teams such as the Patriots and Chiefs. Although they were good wins, there were only two of them, and the losses are much worse. After getting slaughtered by the Ravens(which is understood), the pathetic Panthers, and just as weak Broncos, it is not clear when the Texans will decide to show up. And for the playoffs, you have to show up every week.

Tennessee Titans: The Titans are a team who looked destined to fail. That was until a backup quarterback from Miami decided to save their season with MVP worthy play. Ryan Tannehill lit a spark under the Titans that they needed desperately and got them to the playoffs.

The Reason for Losing: The Titans play the worse possible team for them to play, the Patriots. Unfortunately for the Titans, the reason they lose is because the New England Patriots are the demon they just can not beat.

The Reason for Losing: The Patriots have looked old on both sides of the ball. Although Brady is still accurate, his arm is almost completely shot. The wide receiver core looks more like what a week four preseason Browns team should be sporting, not what a playoff Patriots team should have. The defense is just slower this year. Gilmore and Jackson are great in the secondary, but the rest of the players are not even in the same league as those two. This is a team that can win games in the playoffs, just not make it to the big game.

Kansas City Chiefs: This is a team who has done everything right this season… on offense anyways. Mahomes and his crew look almost unstoppable. The defense has also picked up their play with clutch takeaways in big moments. How could this team possible lose?

The Reason for Losing: The Baltimore Ravens. Although the Chiefs beat them once this season, the Ravens have changed completely. The first time they played the Ravens tried to out-dual Patrick Mahomes. That is a horrible idea for any team to try. Since then, Baltimore has figured out how to win: deep throws and smashmouth running. Those two things are horrible for an overachieving Chiefs defense. For Chief fans, rooting for a 101-100 win is all they can hope for.

Baltimore Ravens: An almost perfect season, headlined by a should be MVP quarterback in Lamar Jackson, the Ravens are most people’s Super Bowl favorites. This team is in peak form and is hungry to bring back the Lombardi for the first time since 2012.

The Reason for Losing: Lamar Jackson gets hurt. That is the only logical reason for this team to lose.

Seattle Seahawks: This is a great team, led by Russlle Wilson who will finish second in MVP voting. They seem like a team who could really be poised to deal some damage in the postseason. Having a seemingly easy first playoff game, the team should be warmed up to take on the 49’ers. They know what they have to do to win.

The Reason for Losing: That being said, the reason everyone believes in them is because of quarterback  Wilson. They have lost so many players on offense that it may be hard for Wilson to overcome the defensive likes of a team such as the 49’ers all by himself. Not having much help for the superstar quarterback is what could end the seahawks.

Philadelphia Eagles: This is a team that just had to not be a complete joke to make it.

The Reason for Losing: No Nick Foles to save this mess of a team this year. Sorry Eagles fans.

Minnesota Vikings: A team who has it all coming together. Kirk Cousins has finally shown the ability to be clutch in big moments. The team has very few flaws to come by. There is one glaring one though.

The Reason for Losing: Kirk Cousins can not win in primetime games. If Cousins has to play in even a single prime time game this postseason, then the Vikings are toast. He is an underrated player who always gets picked on by the likes of ESPN and other channels looking for someone to hate. Cousins has played like a top ten quarterback all year. That still does not change his prime time resume however, and that is what ends the Vikings.

New Orleans Saints: What is not great about the Saints. This team want to destroy the Vikings to redeem themselves for the Minnesota Miracle. In the next round(because they will destroy the Vikings), they will avenge their NFC championship game, where they believe they should have won last year. There is one problem however in between the NFC championship game and wildcard weekend.

The Reason for Losing:The Green Bay Packers. To beat a great QB, you need a great QB. That is exactly what Packers fans can hope for with Aaron Rodgers at the helm. Drew Brees is great, but he is no Aaron Rodgers.

Green Bay Packers: Well, it is pretty obvious the Matt LaFleur experiment worked. Rodgers had a great season. He also respected LaFleur enough to not audible out of every run play that was called on the field. This new relationship was made all the more fruitful by huge offseason acquisitions on the defensive side of the ball. Where the old regime refused to spend any money, the new one decided to go all in. The defense is loaded with the two big name free agents leading the way. Both Smiths’(Za’Darius and Preston, no relation) have been crucial in not just the winning of games, but also the change in culture in the locker room.

The Reason for Losing: The NFC is loaded. Even being able to skip the wildcard game, it is still a difficult road to the championship game, especially for someone who is in their first year of coaching.

San Francisco 49’ers: A team who unexpectedly won the NFC. All year everyone waited to see them falter; they never did. The defense came through huge, and all of the first round lineman picks looked like a very good decision. Quarterback Jimmy Garoppolo also made lots of people eat their words and finally respect him. Although they did not win every game, they seemed very formidable.

The Reason for Losing: The lack of experience from this team is what will hurt them. Garoppolo has been to the playoffs with the Patriots, but has never gone as a starter. The rest of the team has little experience as well, as the 49’ers have not been since the 2013 season. This lack of experience could hurt them against teams who do not want to waste what could be their last chance.