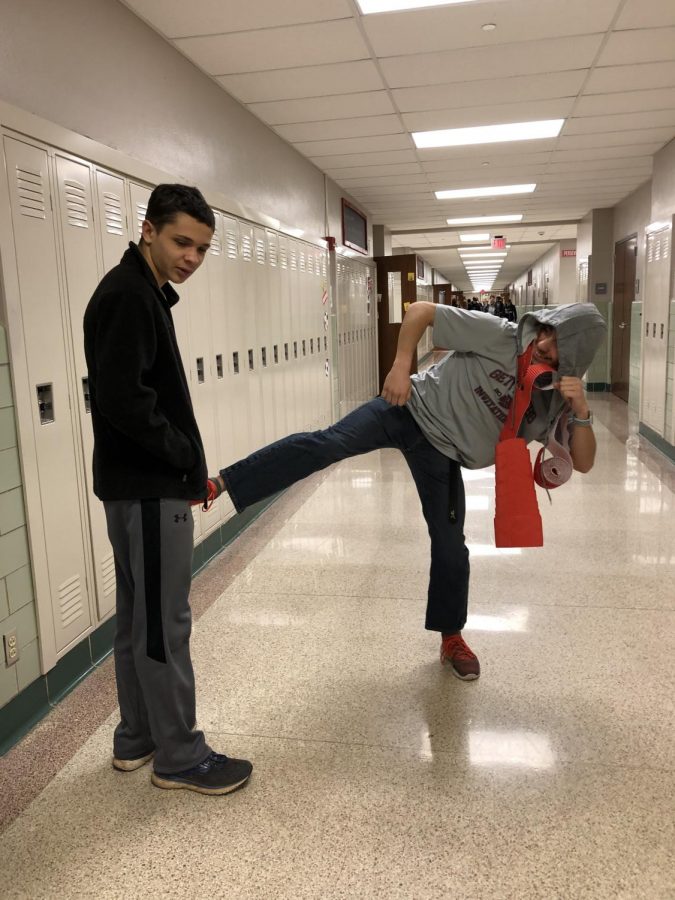 Courier reporters mimic issues in the hallway that may annoy students and faculty. Photograph by Sam Timlin

Hallway issues are running rampant throughout Suskquehannock’s halls, so changes must be made. Some issues include but are not limited to:

If you are traveling in a pack of people and you take up the whole hallway, you are personally causing a problem, as other students cannot get by you when you.
When walking, people should also be walking at a decent speed just in case somebody behind them has a place that they need to get to in a timely manner.
Another issue is people stopping abruptly in the middle of the hallways, causing others to run into each other and drop things.
This is especially important in areas like the tower and the hallway near pre-A.P. history teacher Heather Schoemaker’s and video production Teacher Tim Hare’s rooms; those are two places that are constantly congested and are difficult to get through.
One of the main causes of all of these issues is how people are not aware of their surroundings.
This looks like people walking super slow with their friends, couples showing affection in the middle of the hallway and people looking at their phones and walking.
Some people may argue that they walk slow, so they can spend more time with their friends because they don’t have many or any classes with them.

Spending time with your friends is fine, but walk a bit faster so people can get to where they need to be or instead sit in the lobby with your friends.
Hallways are one place that all of us occupy, and it only takes one person to cause a problem for everyone, so be aware and stop halting traffic.