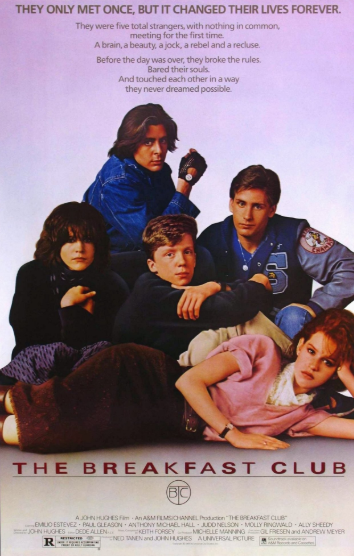 'The Breakfast Club'. Image Courtesy of: @halfalivememes via Twitter

Everyone has their favorite movie or at least their favorite genre, but there are certain movies out in our world that- whether or not you want to- you should see before you die. The pop culture movies people quote or reference to every day, and they might not even realize it. This list,in no particular order, are the top 10 pop culture movies that everyone should see at least once.

“The Breakfast Club” (1985)- The comedy drama that every teen can relate to, ‘The Breakfast Club’ has seamlessly blended into our modern day ideals of high school and its stereotypes. With its now iconic characters and soundtrack, it is sure to stand the test of time.


“Jaws” (1975)- You hear the music, and you know it’s coming. The first of its kind, this unforgettable drama thriller and mystery flick brought an unexpected beach fear to audiences that they would never forget. This movie brought around true fear of the dark water that surround our coasts and will for many more years. With an obvious adoration from critics due to its 98% from Rotten Tomatoes and the sheer fact that it is created by the infamous Steven Spielberg, there is a reason that ‘Jaws’ is on this list.
“The Godfather” (1972)– “I will make him an offer he can’t refuse” one of many popular quotes immortalized through this film. This Italian mafia drama is one that features the talent of Marlon Brando, Al Pacino, James Caan and Robert Duvall.  There are some movies that dedicate their time to building up character stories, others focus on plots, but this movie seamlessly does both. It is also one of the small amounts of movie that actually have successful sequels. “The Godfather” is a groundbreaking and brilliantly made film that deals with themes of power, corruption and family with subtly and finesse.
“Back to the Future” (1985)-The epochal Marty McFly and his partner Dr. Emmett Brown are now common names in most people’s minds. A conflicting plot that poses the question of how time travel would work takes the viewer on an adventure that is hard to forget. After this movie’s release, it wasn’t a surprise that everyone wanted

a Delorian. This film lands in the previously mentioned category of those that have successful sequels. It is one that makes anyone laugh until their stomach hurts and gets the viewer curious about the science behind possible time travel. It poses the question, how far back would you go?
“Rocky Horror Picture Show” (1975)- One of the more controversial movies on this list, “Rocky Horror Picture Show” has all the right components to be noteworthy. From unforgettable music, characters, costumes and themes, this movie has it all. The hypnotizing performance from Tim Curry, who plays Frank N. Furter, shows the beauty and appeal to ‘70s androgyny. There is something so interesting about this movie that makes it a cult classic.


“Carrie” (1976)-Based off of the Stephen King classic novel, this drama thriller makes all teens think twice before messing with their peers. Played by the forever loved, Sissy Spacek, ‘Carrie’ brings to light the horrors of high school in an all new way. The well known bucket of pig’s blood on the prom queen created a staple and new level for thrillers to come in the future, including its own remake from 2013.
“Saturday Night Fever” (1977)- The movie that propelled John Travolta into his life’s career, “Saturday Night Fever” is a film that brings to light the ins and outs of disco in the ‘70s. When anyone thinks of this movie, they automatically picture Travolta’s fancy walk in the beginning to the now famous, “Stayin Alive” by Bees Gees. Although the bell bottoms and technicolor looks aren’t as modern, the theme of escaping to the big city is still highly relevant today which makes it stand the test of time.
“Psycho” (1960)- The one that truly started it all, “Psycho” brings nightmares to those who watch it. No one would want to go into the shower again in fear of being stabbed in the back. This slasher mystery showed the concept of how even the nicest guys can be the most deadly. It’s a Hitchcock famous piece of art and for good reason.
“2001: A Space Odyssey” (1968)- Although the date of its creation might make the viewer question its quality, “2001: A Space Odyssey” was ahead of its time and still impresses those who watch it with its

impressive attention to detail and technology. With a beautiful color palette that pulls in the eye and a soundtrack that seems to get to the viewer in a way that can’t be described, this film created a high standard for the many sci-fi fantasy films to come after it.
“Rocky” (1976)- The film that made a set of stairs a tourist attraction, “Rocky” showed the world what it truly means to work for what you want. An inspirational film to say the least, the performance from Sylvester Stalone catapulted his already growing career. The beauty of this film is that Stalone’s character is realistic about his goals and his ambitions. He knows he does not need to win, which just pushes him in a positive light.