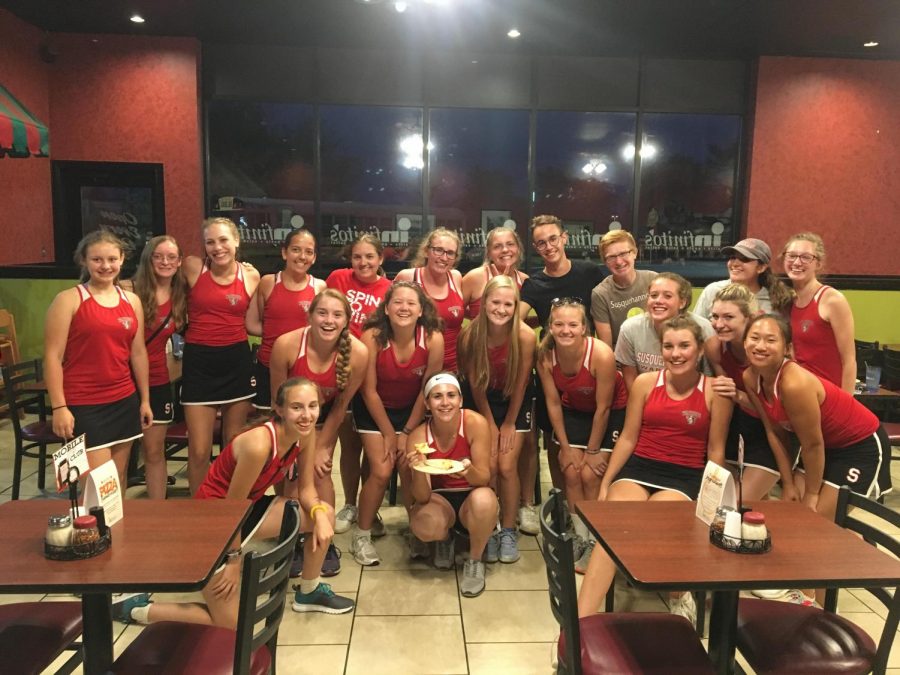 The varsity girls tennis team held a six game streak at the start of the season.

Though they have since lost their series of wins, the team has decided to step up their performance.

Senior and #3 singles player Kate Cramer uses a specific shot and hopes to improve her skills at the net.

“I hit a lot of angle shots,” said Cramer. “…This year, I’ve really developed on my net game, especially as a singles player. Because when I played doubles before I was forced to be at the net, and I enjoyed that. But going into this season, I didn’t think I’d have much time at the net, but because of the people I played, that’s the strategy I’ve had to take to win.”

Freshman and doubles player Angela Kontz relies on the ball to determine her next move.

“I try and watch the ball and move as early as I can to get to the ball in time for a good hit,” said Kontz.

Coach Marianne Michels has been leading the girls tennis team for almost 10 years.

Despite the recent rough matches, Michels keeps her method of coaching the same.

“My strategy has always to bring out the best in my players,” said Michels. “I want them to have the right mechanics and be able to adjust to any opponent that they may face. So, I really want them to believe in themselves and believe in their ability, then go out and do what they’re capable of.”

The team intensively trained throughout the summer and indoors during the winter at Wisehaven Tennis Center in York.

Michels remembers the different methods of training the team endured and attributes their success to them.

“I think the girls won [the streak],” said Michels. “They’ve worked hard, they’ve worked all summer. We had open courts that started Monday after school let out in June and that was every Monday up until camp. Most of them attended camp which was conducted by Wisehaven, and that was the last week of July, beginning of August, and we also had clinics last January that they attended January, February and March so everyone has been training pretty much all season to prepare for this season.”

Even though the girls have worked hard to win their first several matches, the team is worried about next year’s season without the seniors.

Cramer has faith that the team will recover from the loss.

“I think that we have a strong team already for when we leave,” said Cramer. “But since it’s eight of us graduating, that’ll cut down on the numbers a lot, and since I think it’s five of us on varsity, so that means they’ll be five new people playing varsity. Most of them probably have not played at that level before. So it’ll be different for them, but I trust that they can take over the team well.”

Michels want the team to end the season with a winning record and will miss the graduating seniors.

“I really hope we finish this season strong,” said Michels. “We’ve worked hard, and every year I have the greatest team, but this group of girls have been so kind and so hardworking, and they’re really going to be tough to lose. They’ve always been the heart of the team.”