The Good, the Bad, and the Ugly Cases: Why We Hate Chromebooks 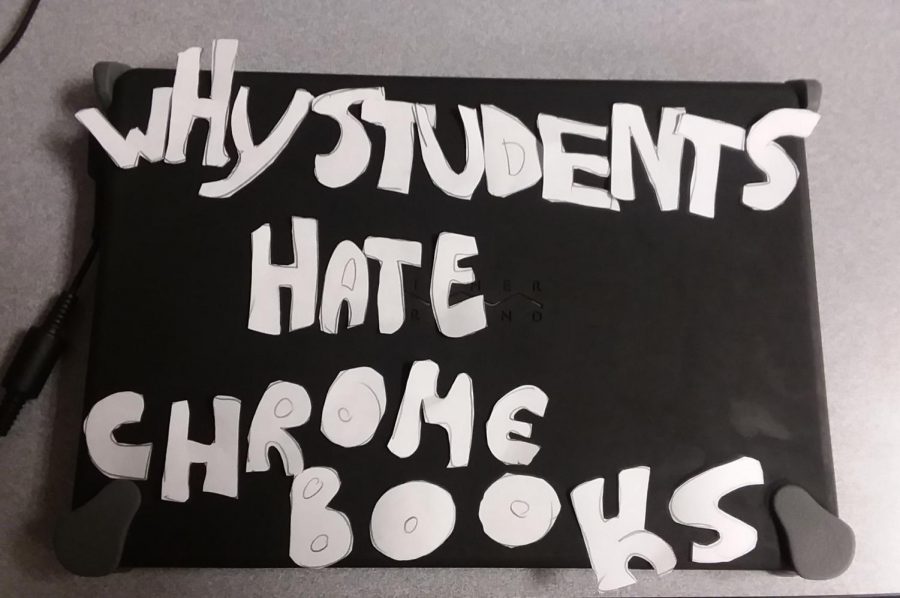 You hear it constantly, in halls, classes and cafeteria: “Chromebooks suck!”

It’s not a secret; kids for a long time have been saying the Chromebooks are old, slow and unyieldingly restrictive in their internet access. The Chromebooks we have are not great, and the issue has only gotten worse with time.

The Chromebooks have problems, some simple and some a bit less simple. The tech shed, the school’s hub for student-provided tech repair sees numerous students a day with Chromebook related issues.

A Tech shed worker, junior Ethan Horne, sees the issue with our Chromebooks, and the problem is clearly their age.

The Chromebooks have begun to outlive their welcome, literally. Most of the problems the Tech shed sees are just side effects of the Chromebooks’ old age and the problems that come with an aging machine. In Horn’s opinion, a lot of the issues with Chromebooks are not from reckless students, though that is a portion of it, but rather from the Chromebooks themselves. Dim screens, cracking frames and odd glitches like logging out the user without warning are the some of the frequent issues the tech shed sees, and a majority of the cases are caused by age. The issue is that these Chromebooks were just not suited for long-term survival.

“I think the lifetime is shorter than we expected,” said Corrieri. “They are definitely run down. They’re not as sturdy as other machines maybe, and so if there is any issue, it’s that some of them are four years old now.”

Corrieri believes that Chromebooks’ issues have more so to do with their treatment than just their age.

“…and they’ve had a hard life. [they] get knocked around in a bag…[and] some kids are very hard on them,” said Corrieri.

Members of Susquehannock high school’s Information in Technology (IT) Department also see issues centering around age, but like Corrieri, they believe the prevention of this problem hinges on students being respectful and responsible.

Bruce Mickey, Coordinator of Technology, sees treatment as the real cause for issues.

“[whether the Chromebooks have held up] has a difference of care in all cases. We’ve seen Chromebooks now in their fourth year, where the care has been excellent, and they’re in ideal condition! Never having been returned for one repair, where others are at the other end of that spectrum, can get beaten up pretty well, [students have control over] the care that they take for [their chromebooks],” said Mickey.

The old age of the Chromebooks and the wear and tear they have experienced over time, however, should not be an issue for much longer. This is the last year for these Chromebooks in the high school.

There are already new “ruggedized, touch screen, ‘yoga’…Chromebooks,” as Network Systems Specialist Greg Hunt described them, in circulation throughout the school that present a solution to some of the Chromebooks’ issues.

Students have been complaining about more than the Chromebooks themselves, though.

Sophomore Maja Paulk interjected that “Chromebooks don’t let us use the Chrome Store,” which can be aggravating if the widgets are non-harmful, or especially if they are genuinely beneficial for students’ education, like Google Dictionary or Daily Planner.

A similar problem comes with the strict content filter.

“You’ll have to look up Marijuana for health, you’ll go to google it, and it’ll be blocked,” said Paulk.

Another ridiculous example is ‘fattoush.’ Paulk feels instead of protecting the students, the safe walls prevented them from reaching their full academic potential.

Corrieri says she also feels the weight of this inconvenience, as even staff must go through administration to use widgets, and it can be an obstacle.

On the other end,  Hunt says the IT department is overall very satisfied with the content filter on the Chromebooks.

“Are we happy with the current safe wall? I think so, yeah,” said Hunt.“The content filter that we have is a very modern filter. They design their product with K12 education in mind, and ever since we been working with them they’ve done a great job. They’re very fast to react very fast in updating their policies and everything, and it’s been very well with the partnership that we have with them.”

Data Systems Specialist Heather Hughman-Stetter only had one fear about the content filter, and that was it not being restrictive enough.

”Codebook compliance…the protection act that keeps student data private, is what we use to protect everyone’s information, so all of the systems that we use throughout the school district are codebook compliant. When you give students their own devices, they’re able to do a lot of research which is really good,” said Hughman-Stetter. “They’re not limited to the resources that are here physically, but there’s always that chance that they could potentially put themselves in danger if they [use a] website [that’s not secure], so that’s always a concern, I think.”

The main reason students do not like the Chromebooks is that they are restrictive.

There is clearly no ill will gone into giving us these machines, and the issue of less than modern machinery was simply an oversight; however, the students are still going to feel restricted. Even with good intention, when the students are heavy-handedly prevented from accessing resources, it feels a little insulting, as if they are not trusted to make good decisions.

“21st century learning [is] independent. It’s at different paces, it’s at different rates, you can dive into more of the things that you’re interested in, and it’s an experience that gets you more prepared for the next steps in education, ” said Hunt.

But so little of it are students able to access through the filters.

There are students who have not earned their technology, and there are websites out there that could harm us, but punishing the majority on the grounds of ‘better safe than sorry’ feels unfair.

The real reason students hate Chromebooks has to be that we desperately want to access the bright new world of education that has been placed at our fingertips, but we cannot seem to manage to through our slightly-dimmed screens.