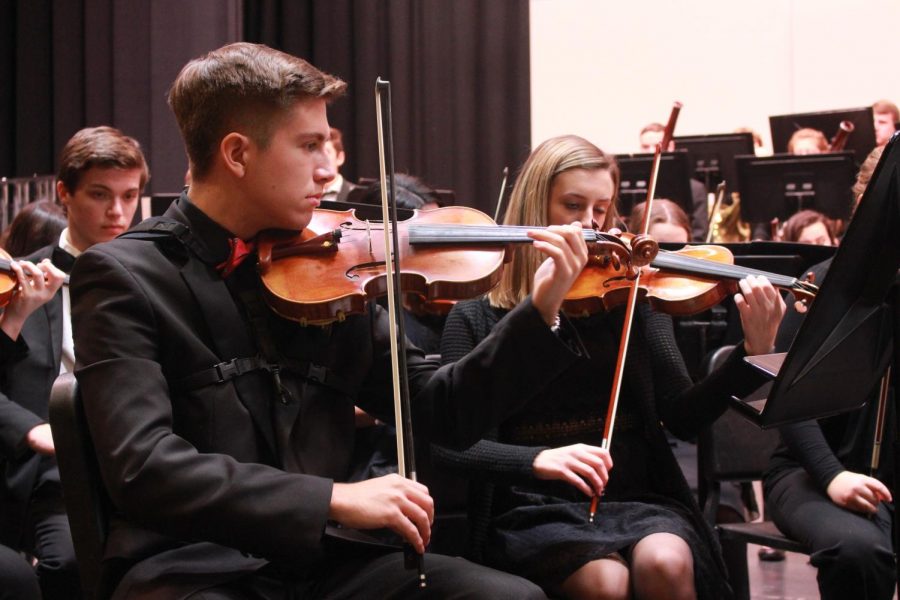 Orchesta members tune their instruments before the concert begins.

The Holiday Concert on December 17 was a rousing success.

“The students performed very well. I thought the entire concert was very engaging, all the music was very different from each other so it was very interesting,” said Poole.

Each music group had to prepare extensively for the concert.

The choir had been rehearsing since October, and the band had five rehearsals since November.

“I’d always like to have more time, the calendar kind of dictates to us a bit… If it were a little earlier, or a little later, we could alter what we perform,” said Poole.

Musicians always have to make the best of short rehearsal times.

Jay Althouse, the choir director, was impressed with the choir’s ability. “The choir alone I was very impressed with and very happy with. They worked on some really challenging things, and they really did a nice job with it. Even in our dress rehearsal I said, ‘Hey, we need to fix this,’ and we didn’t have time to fix it, but in the concert they remembered it and fixed it too,” Althouse said. “While there are always bumps in the road somewhere in the performance, it’s a live performance, it went very well. I was very proud.”

Orchestra director Zachary Levi felt that the orchestra and other music groups put excitement into the concert.

“I felt they did a fantastic job. I feel like the students in the music program really know how to spice it up in a performance. With an audience and the excitement of a performance, it always seems to be better than any of rehearsals ever get,” said Levi.

Althouse thinks the groups improve with every concert, as they are motivated to be the best they can.

“As musicians, we always want to improve. I wouldn’t say we need to change that we’ve done right now, we’ve done the best that we could with what we had, but we can always improve,” said Althouse. “I always tell my students that musicians always strive for a hundred percent, and then we’re never going to get there, but we always have to keep moving forward.”

Poole reminds students to keep coming out to the concerts and support the music groups.

“I thought it was a very great event. It was nice to see all the students come out this time around. They always do, but it seemed like there were more students this time. It was a lot of fun, it was awesome.”