Student Beats out the Competition in Essay Contest 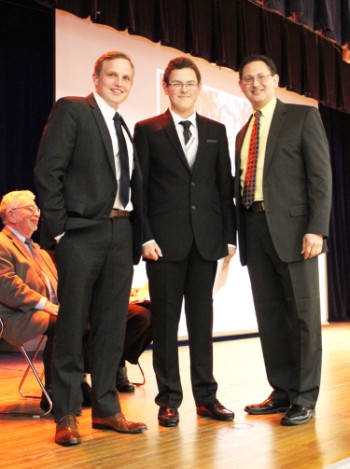 Freshman David Wentzel wrote an essay and submitted it to the Yom HaShoah essay contest and won. This essay contest is an annual contest run by the York Jewish Community Center. It is meant to commemorate the day of Yom HaShoah, Holocaust Remembrance day in the Jewish faith.

The prompt of the essay was, “There are countless stories of ‘moral courage’ exhibited by Holocaust victims, survivors, rescuers, and liberators. What lessons have you learned from these stories and how might you apply them to your own life?”

Taking him four days to write, Wentzel said the hardest part of writing the essay was coming up with ideas and defining what evil was, while the easiest part was actually getting the ideas down on paper.

“I drew inspiration from my past. My great-grandmother was alive during the Nazi regime. Although I never heard stories of individuals who were exceptionally brave, I have heard the story of my great-grandmother’s lack of courage during those times. She didn’t shelter the vulnerable, she never helped anyone. She was too scared,” said Wentzel. “I want people to take away the idea that evil comes in many forms and there are many ways to combat it.”

There were twenty-two total submissions to the contest, five of which were from Susquehannock High School. Three finalists were announced and were asked to attend a commemoration event on April 23, 2017.

“I think the biggest thing that people need to recognize from David’s essay is that one person can truly make a difference. One person can actually have an impact on the lives of others and that they can do some really good things in the world. Apathy is truly a dangerous entity in the world,” said Groth, “I think the greatest thing that he did was he took a very sobering experience and connected it to a personal story… the fact that he discusses the idea of his great-grandmother and what she didn’t do and the regret that she expressed to it, that is one of the most powerful parts because he has a real connection to the lasting regret that one has from not doing what they feel like they should’ve done.”

At the commemoration event, they participated in Jewish prayers and commemorated Holocaust remembrance. A Holocaust survivor also spoke at the event. The finalists were announced and then the winner. Wentzel was asked to read his essay aloud to around three hundred people, and he received a standing ovation.

Groth, who attended the event to support his student, felt Wentzel did a great job delivering his speech.

“There was a lot of time put into writing the essay and revising the essay. David sent me multiple copies of his work, and we went back and forth for a couple of weeks actually, modifying things and trying to improve everything. And then, once he was selected as a finalist, we went into the program that night, not knowing if he was going to have to read or not. We used some creative writing club time to have him practice his speech, but then there was probably countless hours that he spent reading over his speech,” said Groth. “The time he put into practicing was very apparent… He nailed the delivery of his speech. He did justice to the subject.”

Winning this essay contest was a great accomplishment. David was awarded $180 in acknowledgment of this achievement.