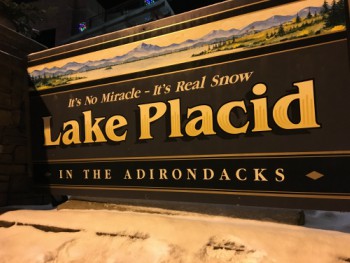 During the winter break of 2016, many students stayed home with family, but some traveled to other states.

Like most people who travel over the holidays, she went to be with her family.

“I took my trip up there because my grandparents own a cabin right on a lake up there, so that’s where we vacation to,” said Folfas.

Folfas also spent a lot of time outside in the snow.

“When we were up there, we ice skated on the lake, took walks in the forest, and also took a trip up to Lake Placid to see ski jumpers. My winter break did live up to my expectations because I had so much fun,” said Folfas.

Seeing the ski jumpers was one of the highlights of Folfas’ break.

“We got to go to the Olympic ski jump complex in Lake Placid, and they jumped off of the second biggest one, the 90 meter tower… it was really cool just to see the jumpers soaring off the tower in person. The event I went to was a very big, annual event, and there were hundreds of people there,” said Folfas.

Freshman Julianna Baibos went to Gaylord, Michigan, for 9 days over break, also to see her family. During her time there, she was also able to spend time outside in the snow.

“While we were there, I spent time with family, skied, went sledding, and went ice fishing. It was good to see all [of] my family, which was my favorite part,” said Baibos.

Baibos got to experience many new winter activities while she was there.

“I’ve never ice fished before… I caught a small bluegill but we didn’t stay out long. Since it was our first time, we didn’t spend a while outside, and we didn’t bring a shanny so it was too cold to stay out long. I have never skied before but that was fun. We also took a dog sledding ride at a resort,” said Baibos.

Freshman Livia Haines went to see her dad in New York City for 8 days. While she was there, she was able to do so many things around the city.

“When I got there, I opened up Christmas presents, and over the time I was there, we saw a musical, did some cool things around the city, and watched the fireworks over Central Park after the ball dropped. The break definitely lived up to my expectations; I got to do a lot of fun things,” said Haines.

Haines also got to go see a new broadway musical, which was a memorable experience for her.

“I went to see Dear Evan Hansen, which was incredible. The show was really good, it’s super new; I think it came out in early December. Its reviews are fantastic, people are saying it could be the next Hamilton. I’m really excited that I got to see it so early on, and I highly recommend seeing it,” said Haines.

This winter break consisted of making many unforgettable memories and new experiences, especially for those who got the opportunity to travel.