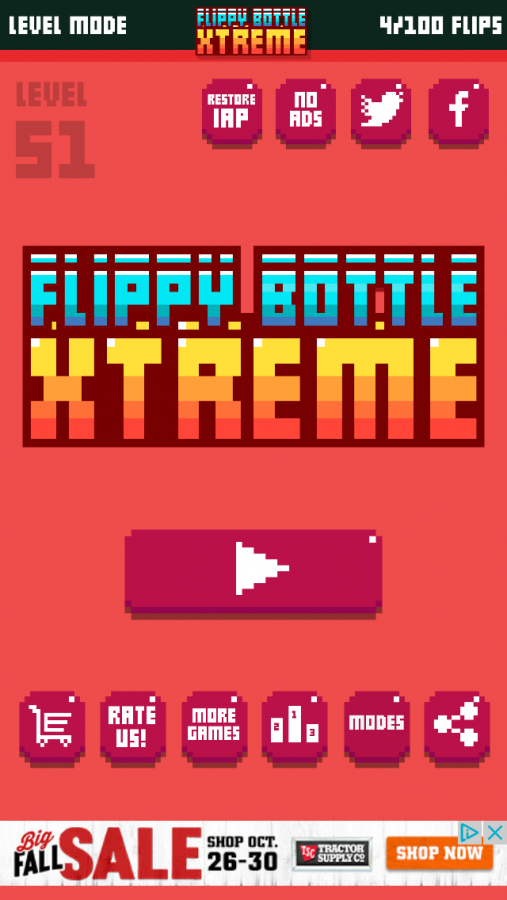 Players are greeted by this home screen when they first open the app.

In this game, players can mimic the famous flipping the bottle challenge right on their phone through eight different modes. These modes include different challenges such as cap level, space, level and endless modes.

Sophomore Belle Luzier who is on level 668 feels that the app is more fun than flipping an actual bottle in real life.

“I prefer flipping a bottle on my phone compared to real life because it’s fun, easier, and more efficient,” said Luzier.

Sophomore Annabelle Bobby  has a love-hate relationship with the game.

When she first downloaded the game, it took Bobby close to 100 tries for each level. Now that she is used to the game, she can estimate how much pressure she has to put in order to flip it which has made her average number of tries decrease to 20.

Despite this, Bobby feels that some of the modes could be improved.

“I think it can be improved by making the modes easier because [in] some of them you have to flip [the bottle] to land on the cap or like try to defy gravity,” said Bobby. “I think they could [also] add more bottles.”

After earning coins, players can unlock different kinds of bottles that can be flipped.

Luzier and Bobby both agree that the Gatorade bottle is the best one to use because it has a larger base.

Overall, this app is for people of all ages that are fans of the new flipping bottle fad.